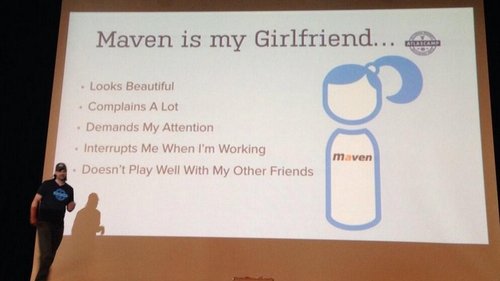 First of all: wow, misogyny. As Rick Scott put it, this slide amounts to “Bitches. Amirite?”

A few people have rushed to Doklovic’s defense, claiming, “Nono, you misunderstand; he wasn’t talking about girlfriends as such. Of course that would be inappropriate! No, he was complaining about his specific girlfriend.”

I spent too many years with a partner who used public humiliation, guilt, and intimidation to get their way. They complained in public, in my presence, to our mutual friends that I didn’t make enough money, while spending it all buying those friends drinks. This partner told people that dating a nerd is worth all the downsides because they don’t have to have a job, and you never know, I might one day create the next Facebook and become a millionaire. Then in private, when I told them those things really hurt, they’d tell me that it was just a joke, and I shouldn’t take things so seriously. That my sensitivity is the reason why they have anxiety problems and can’t regulate their emotions without drugs and alcohol.

My self-esteem hit rock bottom. I was empty for years. My family didn’t recognize me. I lost most of my friends, and a valuable chunk of my twenties.

Thankfully, I bounced back.

All totaled, the divorce ended up costing over $80,000, and I consider it the best money I’ve ever spent. Thank the universe there weren’t any kids or mortgages involved.

I’m not sharing this for sympathy. I’ve lived very well since my divorce, and I’m lucky in more ways that anyone has a right to. I had the real power the whole time, and just had to recognize it.

I’m sharing this so that you understand why, when someone shares a slide like this, proudly making a joke at the expense of their significant other, I am struck by blinding rage. If this was about me, I would have dumped him via a public tweet. If I’d been in the audience, there’s a good chance I would have ended up being kicked out of the event.

Saying “Nono, this was about his specific girlfriend, what’s the big deal?” is really no defense. If his girlfriend is a real person, she has real feelings, and I sincerely hope that she has the strength to recognize the problems with this behavior and get out as soon as possible.