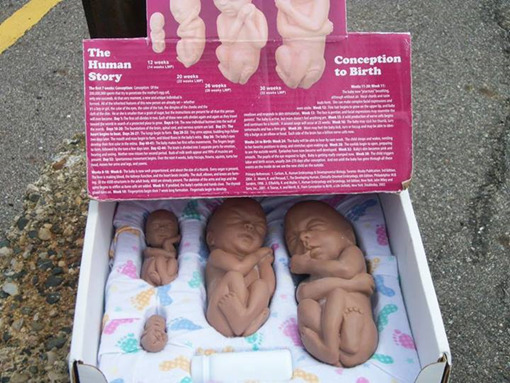 A pro-life group in Lansing, Michigan says fetal models have helped save a baby from a late-term abortion. Officials with 40 Days for Life in Lansing posted a picture of a set of fetal models that it says helped changed a woman’s mind about having an abortion.“ I showed the 30-week model to a late-term mom who left the clinic and DID NOT have an abortion. Praise God!” the group wrote.

Literally none of these except the final one is anatomically correct. You literally have a minuturized born infant model as your 12 weeks ant 8 weeks fetus, this is BLATANT misinformation and lies.

Additionally abortions at 30 weeks? Aren’t legal ANYWHERE in the world unless the fetus is already fucking dead or cannot survive outside the uterus on it’s own. You didn’t save ANYTHING, or else you are lying about gestational age OR they weren’t actually going for an abortion or you made the whole story up.

This is propaganda, misinformation and lies, it’s disgusting and it doesn’t actually help your movement. This is (among the reasons) why pro choicers think pro liars are full of shit, and refuse to respect you or your movement.

Via: Girls LOVE Sex Too